“I always was real because I believed I was real, in the sense that it was a character that was formed from the beginning that was based on reality. I always try to explain to people that I was [already] Bret ‘The Hitman’ Hart when I was 6 years old.”

Born a winner. Created in the Dungeon. Still revered as one of the greatest wrestlers of all time. Bret “The Hitman” Hart wasn’t just the swagger of the wrestling world in the 1990s, he was an aura, a charge in the air, a movement. His five moves of doom were perfect: The inverted atomic drop, the Russian leg sweep, the backbreaker, the elbow drop from the second rope, and finally the famous finisher, the Sharpshooter.

The Excellence of Execution became wrestling’s highest art, and this hot pink hoody is in homage to Canada’s finest!

super soft. fit is good. color is exactly like shown in photos. great hood. drawstrings are a little long, but nbd. 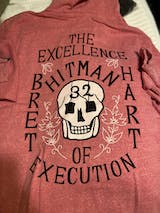 A
Anonymous
The Best

Love it! I truly enjoy buying the hoodies from RoF. Have not been disappointed. They are soft, warm, and of great quality. Love the color! Truly the best.