“However long we live, we never forget the time when we were young.” –Pelé

At the 1958 World Cup in Sweden, there was magic in the air. Pelé was just 17 years old playing on the global stage for Brasil, but what he did was ageless. Not only did he become the youngest to ever score a goal in World Cup competition, in the semifinals he hung hat trick on France to announce himself as a true phenom, before netting two more goals in the Final against the host country of Sweden in Solna.

As the first World Cup to receive international television coverage, a legend was born. As Brasil gets rolling in this year’s World Cup, we’re dropping this new blue sweatsuit that matches the colors Brasil wore in the 1958 WC Final!

So happy I got my hands on these joggers! They are extremely comfortable, soft and I absolutely love the meaning behind them!

Thank you, Roots of Fight for uplifting the name and accomplishments of a truly extraordinary man. 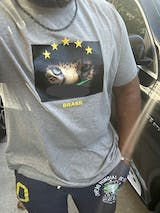 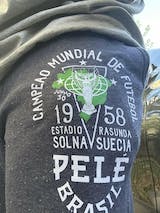 Love the whole line, my closet is full of nearly every sweapants, Tshirts and Hoodies ! Keep it up boys. Bring the Mike Tyson line back please !