March 8, 1971, Madison Square Garden. It was called the “Fight of the Century,” and the stars aligned to watch Muhammad Ali make his return after three-and-a-half years to take on the great Joe Frazier.

Outside the arena was bedlam. Inside the stars packed its seats. Film director Woody Allen was there, along with Vice President Hubert Humphrey. Burt Lancaster was part of the broadcast commentating crew with Don Dunphy and Archie Moore. Norman Mailer was there, too, and he’d later dedicate a short book on the fight, called The King of the Hill. Bing Crosby couldn’t get in and had to watch on a closed circuit among thousands at Radio City Music Hall. But Frank Sinatra, ensuring he’d get a spot as close to the action as possible, took a freelance gig as Life magazine’s ringside photographer.

What followed was one of the greatest fights of all time.

Absolutely one of the best hoodies I have ever worn. Clearly the reason Greatest Of All Time #goat

I'm living in Greensboro North Carolina and I wore my suit to the New EDITION concert and everybody wanted the website. 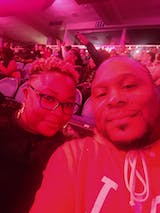 l absolutely love ROF products....but this sweatshirt is my favorite! Great texture & very distinctive look. I have 4 ROF steed, but this one is my first sweatshirt purchase.....it did not disappoint! I wish I could wear it all year. Lol.