TODAY ONLY: 15% off the Boxing collection Marshall 'Major' Taylor changed the game while the rules were still being written. A decade before Jack Johnson. 37 years before Jesse Owens. 48 years before Jackie Robinson. This is when the legacy of Major Marshall Taylor began. Often overlooked as a sports Icon, Taylor became the first-ever US Black World Champion and only the second Black World Champion in any sport, ever.

Taylor was breaking records at tracks all over the US and later the rest of the world. The racial abuse and prejudice he experienced were unthinkable but, he endured and would compete in spite of the obstacles in front of him. Throughout his career - which saw him compete and break records all over the world - he challenged the racial prejudice he encountered on and off the track. He was a pioneer and role model for other athletes facing racial discrimination.

Great quality of sweats. Warm and comfortable. Caution do not wear in hot climate lol. But overall love the duo pair 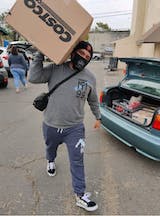