Ilaria Urbinati and Johnny Hunt have stepped back into action to bring you some new Muay Thai pieces to add to our collaboration collection. Ilaria Urbinati is an award winning stylist whose clients include Rami Malek, Donald Glover, Ryan Reynolds, Dwayne Johnson, Ben & Casey Affleck, Chris Evans, and many more. She also trains Muay Thai and boxing with Johnny Hunt - who is a former world-ranked Muay Thai fighter and martial artist who fought & trained for many years in the US, Thailand, Japan, and China. He now trains a long list of top celebrities out of Fortune Gym, Hollywood.

According to legend, in 1774 Nai Khanom Tom was one of the thousands of Siamese prisoners being held by the Burmese King Mangra after the Burmese invasion in the Ayutthaya Kingdom. The king selected Nai Khanom Tom to fight against a Burmese fighter. Nai Khanom Tom won by Knock Out. The referee claimed the win not valid due to possible sorcery.

The King then sent in 9 other fighters, one by one without time breaks. They were all put on the ground by the hands (and knees and elbows) of Nai Khanom Tom.

Impressed by these abilities, King Mangra claimed Nai Khanom Tom to be “blessed with venom”.

He was pardoned, along with the other Siamese prisoners, and allowed to return to Siam. He was acknowledged as a hero and his fighting style became known as Siamese-Style boxing, later to be known as Muay Thai and would be recognized as the national sport.

This is a solid quality jacket. I was hating on it because of the price and experience with similar companies purporting to have top-quality gear. I was impressed with the presentation. The box was collector's item worthy, so that alone let me know RO was not a hacky company. $275 is pretty steep for a stadium jacket. If it was a sturdy bomber or letterman, I could see it being better value. At any rate, I got it on sale for $130 so that was super fair for the quality. It's clearly handstitched, inside and out. Everything about it turns heads. You'll get lots of compliments and people will be staring at its immaculateness. I'm 6' 2", 215 so the XL felt just right. The large would have been too tight, but if you're a beanpole, the large might work out. All in all, it's top shelf product.

The jacket is fantastic! The details of the stitching are Great! This is my 2nd Stadium Jacket. I also have the Iverson. Definitely a great buy. 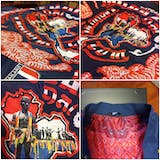 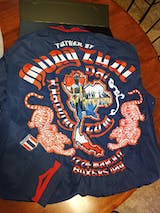 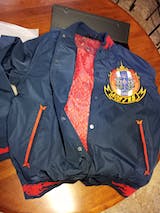 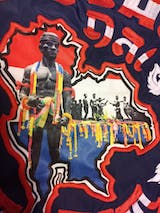 Very happy with this purchase! glad I went up a size as it fits great. I'm 6' 5" 210 and chose the Xl never mind the way it is shipped out?? nice job on the packaging very impressed, leave it at that as I don't want to give it away....
Thanks again,
Troy

The packaging is beautiful and so is the product. Great quality. I bought this as a gift for my Muay Thai coach and it could not be more perfect ! I look forward to buying more of your product.

This was a perfect gift for my son! He loves it! It’s a medium and fits well! He says it’s comfortable and receives plenty of compliments!

Beautiful jacket delivered in a timely manner. Fit is a little tight if you are in between sizes order the larger size.