On the biggest stage the sporting world had ever known, March 8, 1971, “Smokin’ Joe” bested Muhammad Ali. It wasn’t just one for the golden age of heavyweights. “The Fight of the Century” ended up being exactly what it was.

It was a massive bout, an unforgettable moment in time that captivated the sporting world’s imagination heading in. Yet in this case, calling it “The Fight” ended up not going far enough. In the immediate aftermath of that fateful first clash between Ali and Frazier, scribes added three words to the original designation — “The Fight of the Century” — because it busted the seams of even the wildest, most optimistic expectations.

If this fight never happened, if Ali hadn’t suffered a loss with the world watching, it’s likely he’d never have come to be known as “The Greatest.” For even those who wanted to see him lose, how he treated the rest of the decade was undeniable. That loss set up the direness and doubt for his fight with George Foreman in Zaire in 1974 — doubt he reimagined as inspiration. It set up the trilogy with Frazier, with Ali winning the rubber match four years later, in what would be forever known as “The Thrilla in Manila.”

This new super-soft tee reps one of the greatest nights in boxing's history - Ali vs Frazier I at the Garden.

Amazing shirt celebrating the 50th anniversary of the fight of the century. Picked up a size large and it fit perfectly. Please continue to bring us more Muhammad Ali gear!! 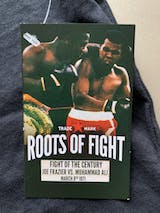 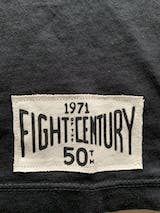 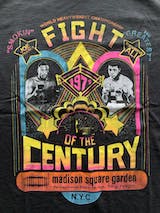 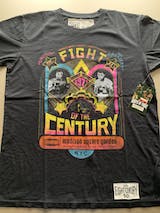