Soft and well made. Perfect. 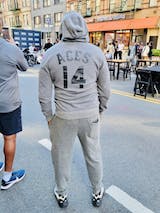